Here is a business bio about me: 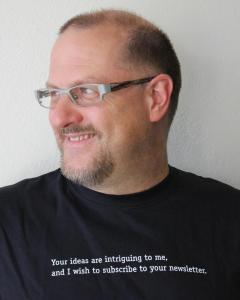 After graduating from the University of Adelaide in 1986 (Bachelor of Science in Applied Mathematics and Computer Science), Simon Hackett was a part of the national university team that created the Australian Academic and Research Network (AARNet) – the first emergence of the Internet in Australia.

In 1991 Simon founded Internode, initially with the intention of making commercial IoT gadgets (in 1991!), but that never quite happened.

What did happen is that he grew Internode into one of Australia’s largest privately held Australian broadband companies, committed to excellent network quality and with a relentless focus on customer service. Internode built and managed its own broadband infrastructure in Telstra exchanges. It also built an internally managed global network of Internode-owned networking equipment connected with dedicated fibre network links from geographically diverse providers around the world, in order to deliver the highest possible performance and availability to its customers. Internode continues to win national customer service awards to this day.

By 2011, Internode employed around 450 staff, it had 260,000 active services including 190,000 broadband customer links across Australia and an annual turnover of more than $180m. Simon sold Internode to iiNet Limited in a $105m transaction in December 2011, and continued as Internode Managing Director until joining the iiNet board as a non-executive director in August 2012.

In late 2012 Simon started a new company called Base64 Pty Ltd, that manages his family office and that resides in and manages a beautiful campus of renovated heritage buildings in Kent Town, South Australia. You can read more about Base64 here.

He has subsequently made investments in various things including  AvSoft, Brecon Estate, Evoke, Redflow, VAF Research, BlueChilli and UltraServe.

Simon served as a non-executive director on the board of NBNCo Limited, from November 2013 until April 2016.

Simon is a significant investor in an innovative ASX-listed zinc-bromide flow battery maker Redflow Limited (ASX:RFX). He served on the board of Redflow from November 2014 to November 2018, including periods spent in the roles of both Chairman and CEO.

Simon architected and continues to be involved with the ongoing development of the Redflow Battery Management System (BMS). This is the core technical element that smoothly interfaces the unconventional Redflow ZBM2 battery into conventional renewable energy systems.

He has also held board positions with the Adelaide Fringe, m.Net Corporation and the Australian Network for Art and Technology (ANAT). He was a founding director of the Internet Society of Australia (ISOC-AU) and the founding president of the South Australian Internet Association. He received the Charles Todd Medal for contributions to Australian Telecommunications in 2014.

The Hackett Foundation undertakes targeted philanthropy work in support of community endeavours that our family wishes to support – most notably including the presenting sponsorship of WOMADelaide. Other things the foundation has supported include some aviation-related entities of benefit to the community such as Airborne Research Australia and the RFDS. The foundation choses its own beneficiaries based on its own internal criterial and it is not seeking unsolicited proposals.

On a more personal note…

I am a keen pilot, qualified and flying various fixed wing aircraft including a Stemme S10-VT motor glider, a Pipistrel Taurus Electro and the fantastic Pilatus PC12. I like it the PC12 so much that I made a Pilatus PC-12NG Testimonial about it.

I also love electric cars. Here’s a Tesla testimonial that exemplifies how much I love them… and I am (of course) a Tesla shareholder. 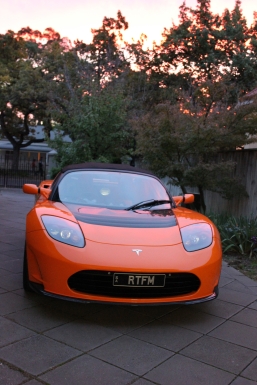 The way I got involved with EV’s bears some explanation. After driving a GM EV I in California in the late 1990’s, I was really keen to buy the first decent electric car that I could buy, and to drive it in Australia.

At the Future In Review conference in 2006, I met Elon Musk, who was mostly there to talk about SpaceX, but who was also happy to talk to anyone who would listen, about the Roadster EV that Tesla was working on. It was clear to me that this was the car I was waiting for – the first EV that didn’t suck.

While the car didn’t (then) quite exist, and all he had to show for it was a CGI image of what it’d be like. I could see he was a man not interested in failure! I put my money down and ordered one – not withstanding that it was a left-hand-drive California-spec car (not road legal in Australia).

In August 2009, after privately importing that first Tesla Roadster (number 186) into Australia, I drove it (on a special permit) from Darwin to Adelaide in a sister event to the World Solar Challenge… just to prove that a production EV could do that trip. And of course, it did. On one stage of the event, I drove it 501km through the desert on a single charge. That was a world distance record for production electric cars at the time.

Naturally, once Tesla floated, I bought shares. I also ordered more Tesla cars. Our family took delivery of the first two RHD Tesla Model S cars in Australia. One of those original two cars is now part of the electric limousine fleet at Evoke.

These days our home garage contains a Model S P100D, a Model X P100D and the last ever Australian-delivered RHD Roadster 2.5 Sport. That original California-spec Roadster is back in California these days, still doing just fine. Our driving-age kids drive Model 3’s because we want them in the safest cars on the road.

We no longer have any cars at home that burn fossil fuels. We also make most of our transport energy on the rooftops of our house and our office. As a result, most of the electrons that go into our vehicles come from solar panels, either directly or via solar energy time-shifted through a large Redflow battery array

We are currently at work on a variety of renewable energy deployments and building projects at The Vale in Tasmania.