The Base64 energy system has been a fantastic learning experience for us in general and me in particular.

The system is built around a large Redflow ZBM2 battery array. We call these configurations an “LSB” (Large Scale Battery). It is charged with solar energy harvested from a large solar array (most of which is ‘floating’ above the staff carpark).

We deployed it first some time ago now, prior to having got so deeply experienced with using Victron Energy inverter/charger systems. At the time we (Base64) purchased a big custom industrial AC inverter that didn’t come with any sort of monitoring or logging system and no control system to drive it to interact properly with on-site solar.

All of the necessary energy system control, management and data logging technology comes ‘out of the box’ with the Victron Energy CCGX controller unit in a Victron installation,  so I imagined ‘everyone’ provided such things. Well, I was wrong about that.

The big industrial unit we bought came with nothing but a MODBUS programming manual and created a lot of head-scratching along the lines of… ‘now what?’. For some reason industrial scale systems are in the dark ages in terms of the stuff that Victron Energy have ‘nailed’ for the residential/SOHO battery market – they supply great, easy to use, easy to understand, effective and powerful out-of-the-box energy system control software and hardware (entered around their CCGX/Venus system). It also comes with an excellent (no extra cost) web-accessible portal for remote data logging, analysis and remote site system control.

Meantime, we were exercising our large battery ‘manually’ – charging and discharging it happily on a timed basis to prove it worked – but we were unable to run it in a manner that properly integrated it with the building energy use, for the lack of that control system in the inverter we had at the time. We didn’t want to write one from scratch just for us – that’d be a bit mad. We also didn’t want to pay someone else thousands of dollars to set up a third party control system and make it work – a major consulting project – just to do what the Victron Energy CCGX does on a plug-and-play basis at very low cost.

In parallel, and importantly – it also took ages to get substantial on-site solar operating at Base64 – and there wasn’t much point in driving the LSB in production until we did have a decent amount of on-site solar to sustainably charge it with.

To the latter point – we are in an massively renovated and reworked heritage listed building and I was unable to get permission to mount solar on the massive north-facing roof of the main building.

Instead we commissioned a rather innovative mounting system that has (at last) let us complete the installation of a 50kWp solar array that literally ‘floats’ above our staff car park on four big mount poles supporting what we call ‘trees’ – suspended metal arrays holding the solar panels up.

That system was commissioned and imported from a company called P2P Perpetual Power in California to suit our site. There are lower cost systems – but (by comparison) they’re ugly. We wanted it to be beautiful, as well as functional – because Base64 in all other respects is…both of those things.

It was worth the wait.

The result is (in my humble opinion) quite spectacular.

Including that ‘floating’ 50kWp array, we have a total of 99kWp of solar on the site, though some of the rest of it is on ‘non-optimal’ roof directions, and so on a good day what we see around 80kW generated at peak in the high (solar) season.

That said, the advantage of some other parts of the solar system being on east and west facing rooftops is that our solar generation curve runs for more hours of the day. We get power made from earlier in the day (from the eastern array) and later into the evening (from the western one) – and that’s quite helpful in terms of providing a solar energy generation offset to local demand patterns.

In parallel, we pulled the LSB apart and rebuilt it using Victron Energy products and control systems, so that we could get a fantastic operational result and have optimal use of the solar energy to drive the building, charge the batteries, and support the building load at night – the very same stuff we do in houses with our batteries, just on a bigger scale – without facing a one-off software development exercise for the old proprietary inverter system we had been using.

Swapping the Victron Energy gear in has turned out cheaper and far better than the bespoke software exercise would have ever been. It has also created a signature example of a large scale Victron Energy deployment running a decently sized multiple building site. I hope that this, in turn, may inspire more of the global Victron Energy installation community to consider the use Redflow battery technology at this sort of scale.

The battery array is built with 45 x ZBM2 = 450kWh of Redflow energy storage.

We have 72kWp of Victron inverters installed right into the container as well. We could have gone larger (in terms of peak inverter power), but these have been ‘right-sized’ to the building demand at Base64, with summer peaks normally around 60kW (75-80kW worst case) and typical draw around the 30-40kW level when the building complex is in daytime operation.

It is all linked to that 99kW distributed solar array using via multiple Fronius AC solar inverters.

I’m thrilled with how well the system is working – its a monument to all of our Redflow BMS development work that the whole thing – at this scale – really is ‘plug and play’ with the Victron CCGX energy system controller and the associated inverter/charger equipment.

It is very satisfying to run an office in the middle of a major city that typically uses very little grid energy, that is resilient to grid faults, and that even still exports solar energy to the grid as well.

A subsequent step will be to interface with a grid energy ‘virtual power plant’ operator in the future, so that we can sell battery energy back to the grid during times of high grid demand.

Every battery system on an energy grid has the potential to also become a programmable grid-supporting energy source during peak load periods. The missing links are software, regulation, and attitude – with the software part being the easiest of the three.

We can easily set up to proactively control over when the battery charges and discharges in response to, for instance, wholesale market price. The Victron control system makes that easy.  What need to give that project legs is an innovative retailer who will work with us on that and a small amount of software ‘glue’ to make it happen on our local site.

Here is a little gallery of photos of the system that we’ve installed – click through them for a little more information about the system. 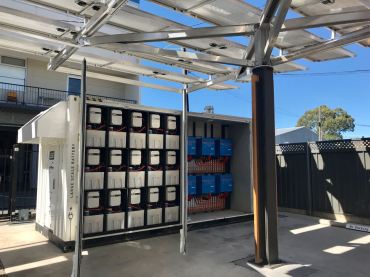 Image from the Victron VRM portal for our site

The primary solar array ‘floating’ over the Base64 staff carpark

Main 50kWp solar array over carpark with additional arrays on other rooftops. Further solar has subsequently been added.