This means I can fly home tomorrow in my PC-12 with a “full-bottle” command instrument rating at last.

Until now, I’ve had a Private IFR rating with a subset of the full instrument rating privileges. The Private IFR rating is an excellent stepping stone to the full Command Instrument Rating. However, it (appropriately) comes with various operational limitations that I have now overcome.

Here (below) are a few photos from today and the previous day or two.

I think the photo of the instrument approaches I flew at the Sunshine Coast airport is especially amusing – my flight track looks like I was trying to learn how to draw a flower (badly).

It was a very cloudy day – I flew almost all of the flight test today in solid clouds and rain, only breaking out of the clouds late on the final approach into each airfield involved in the flight test sequence. 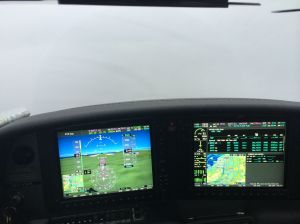 This made it, really, the ideal day to do this sort of test, because in every sense it made it ‘real’. On a clear day, these tests have to be done ‘under the hood’ (wearing a device that stops you being able to see out of the window, and only able to see the instrument panel).

This flight would have been impossible without using the Instrument Flight Rules and all of the nifty navigational equipment that this allows a pilot to employ in order to get around without being able to see anything outside the window except clouds and rain.

It is the use of this rating – and the equipment that goes with it – that makes it possible for passenger aircraft to reliably fly people from ‘a’ to ‘b’ in (almost) any weather, day in and day out.

And for a private pilot like me, it is the rating that unlocks the capacity to fly where you want to, when you want to, as well

A visual (only) pilot is limited to days where its possible to see where you are going throughout 100% of the flight. A day like today would have been completely inaccessible to a pilot without an Instrument Rating.

After a test that ran for around four hours in total, I arrived back at Archerfield with a brand spanking new flight qualification, and an absolutely immense sense of satisfaction.

Huge props to the team at Flight One in Archerfield. They run an excellent and friendly operation for training pilots, they operate to high standards, and I’d recommend them without reservation to anyone keen to do advanced flight training in Cirrus aircraft.

I am especially grateful to the most excellent Adam Starr, my IFR instructor, for his care and his good humour throughout the process of getting me to this point. He is an excellent teacher and I love working with him.

Thanks heaps too, to Reg Grundy (my testing officer), who is (likewise) easy to work with, and a great person to fly with tool. Doing a flight test is not an easy thing. Reg made it tenable, without adding stress beyond that which is unavoidable during such a process.

Its difficult to describe the intense satisfaction gained by doing something like this. It is a large endeavour, involving a lot of theory, a lot of flying practice, and a lot of consolidation to get all the pieces to come together in flight.

The combination of these efforts delivers the privilege (in both the legal and practical senses of that word) to fly where you want, when you want, in almost any weather.

It is a pretty amazing thing.

Weather for ducks and IFR pilots

Flying in solid clouds for just about the entire flight test

TCP waiting to fly me home